Michelle Legro is at the center of a fast-spinning cloud of wonderful things. Her work appears in The Atlantic, in Nieman Storyboard, and on Brain Picker, and she’s the keen eye behind the memetically appealing My Daguerrotype Boyfriend. She also has, of all the editorial jobs in New York, one of the most simultaneously old-school and internetted, as associate editor and online editor at Lapham’s Quarterly.

Calling Lapham’s Quarterly a “magazine” describes its form, but not its essence. It’s a collection of excerpts leavened with a few original pieces, all assembled around a central theme, bound in white covers, and delivered to homes and bookstores four times a year. The result falls somewhere between an academic anthology and a quote-book, but more charming and readable than either of those forms. Founded by former Harper’s editor Lewis Lapham in 2007, Lapham’s Quarterly has produced a bookshelf’s length of printed collections and also lives a variegated life online via a website that publishes dozens of excerpts from each issue, a Tumblr, a Twitter account, and a digital facscimile edition. We asked Michelle to tell us a bit about the editorial process of the magazine, and to give us a peek inside her particular section of the LQ brainhive.

In the past five or six years, we’ve seen an explosion in history-based curation and blogging: Letters of Note, Shorpy, Tweets of Old, The Public Domain Review, Paleofuture, The Retronaut, World War II in real time, the NYT’s Disunion blog, all of which package history into new capsules. Perhaps we should add a third act to Karl Marx’s maxim about history: that it repeats itself first as tragedy, then as farce, and then as content.

We—all of us doing this work—come to un-bury content, from bookshelves, from libraries, from course packets, from notebooks, from letters, from tweets, from stacks of old magazines, from new editorials, from Pulitzer-Prize winning biographies, from dime novel, from commercials, from sheets of papyrus, from engravings, from broadsheets, from scribblings in a margin. And we come to un-bury it here: in print, online, everywhere that will have it.

When we do this at Lapham’s Quarterly, we start with an organizing principle, a theme: love, crime, religion, travel, nature, work. Something simple and stubbornly universal. If it didn’t exist in ancient Mesopotamia, it won’t exist in the magazine. If the readings we choose don’t have at their core something unmistakably human, they won’t resonate.

Then we begin to dig. This requires several distinct and necessary kinds of people: academics, editors, specialists, and interns. It’s essential to have people who know which writers are dangerously overexposed (Shakespeare for one, Thoreau perhaps, and David Foster Wallace is nearing a lifetime ban.) and which have yet to see the light of day. Then we start a list.

Here’s just a fraction of the books, magazines, and ideas I looked at for our most recent issue, “Means of Communication”:

Everyone has a list, and then we meet with our editorial board to make an even bigger list, a massive centuries-spanning list. Then we split it and search it, following footnotes and translations back to a primary source. At last, we find the passages we’ve been looking for, congrats. But is it good enough?

Not all history is a tasty morsel. Walter Benjamin will never parse at 500 words—nor did he ever expect to. Every bit of content we excerpt has to have a beginning, middle, and end. It has to read coherently on its own, without insider knowledge of who slept with whom in ancient Greece.

And then there’s the question of familiarity. Even if you remember reading a selection in the sixth grade, and even if every one you know read it in the sixth grade, it’s simply not fair to assume the reader will know it. These un-buried bits of historical content aren’t here to make us feel stupid, they’re here to remind us of something we never knew.

Once we find the excerpts, we line our selections up in a table of contents and search out chronological holes and imbalances in gender and diversity. Once the list is set from ancient to modern, it gets seriously, and thoughtfully, messed up.

And the final step, the one that un-buries history the most, is to put the whole thing online in a piecemeal collage, one that can be exploded, rearranged, reallocated, contrasted, collected, and isolated.

This work begins with a reordering of the table of contents according to subtle themes, subtext, length considerations, date spread, and of course, humor. And it doesn’t end with the publication of the magazine. Disorder is essential in getting this magazine online and into your feeds.

As the online editor, I sometimes feel like my job is to make something beautiful, just to hack it apart for kindling. Here’s the way I (mostly) think about it instead: any link to a fragment of LQ is a breadcrumb that can bring you back to the whole. Every magazine wants to lead you back to the mothership, but when you finally pick up an issue of Lapham’s Quarterly, what you have isn’t the end of your own curation and the beginning of our vision. It’s the start of a new reading in a closed-off sphere that also resembles the web you came from: a rabbit hole of thought that you’ll gladly fall into. 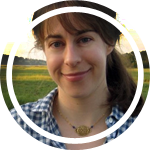 Michelle Legro is an associate editor at Lapham's Quarterly.

“History and Its Contents” appeared as a Feature Article in Issue #3. Issue illustration by Yesenia Perez-Cruz.