Their complaint: it squeezes information into screen-sized “cards” and doesn’t allow scrolling through long documents. The academics agree: cards are too limited. Cards are lame.

1991. I am 12 years old. Unaware of the outcome of the conference, I use HyperCard on a Mac Plus to create my fifth grade final project: a report from the fictional expedition to the fictional planet called Thor IV. This interplanetary debriefing is a “stack” of cards, explanatory text juxtaposed with gray-dithered maps and sketches of alien life. You click shiny black buttons to advance from card to card.

Still 1991. Tim Berners-Lee creates the World Wide Web. His colleague Robert Cailliau is a HyperCard fan, and the web shows that influence—text, images, and buttons, all juxtaposed—but the web is made of pages, not cards, and if you need more than a screenful, you just scroll on.

2012. I am 32 years old. I use Xcode on a MacBook Air to create an iPhone app called “Fish.” I call it a “tap essay” because each tap on the iPhone’s screen reveals another card, and each card holds another sentence, or sometimes just another phrase, another beat. In essence, “Fish” is a HyperCard stack.

2013. We will start to make stacks in earnest again. We will develop a new grammar for this old format. We will talk about rhythm and reveals and tweetable cards. We will know how many cards an average person can tap through in one sitting. We will know when to use stacks…and when to just scroll on. Twenty-five years later, we will prove the hypertext researchers wrong: cards are pretty cool after all. 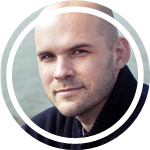 Robin Sloan grew up near Detroit and now splits his time between San Francisco and the internet. His first novel, Mr. Penumbra’s 24-Hour Bookstore, is coming from Farrar, Straus and Giroux in October. You can learn more at robinsloan.com and follow along at @robinsloan.

“House of Cards” appeared as a Feature Article in Issue #4. Issue illustration by Meagan Fisher.