The Silent History is a serialized electronic novel that debuted this week on iOS devices. The story at its heart is big: beginning right around now, some of our children stop developing language, and no one knows why. The novel is an archive of first-person accounts told by parents, doctors, teachers, and neighbors, and they’re released on a schedule, one at a time, from the beginning of the epidemic through to 2043.

Orbiting the body of the novel are dozens of “field reports”—stories written by readers and connected to specific physical locations. To read them, you have to show up, device in hand, at just the right spot on the built-in map. A reviewer on iTunes is planning a road trip to read as many as he can.

The editorial brain behind the project is Eli Horowitz, author, editor, and former publisher of McSweeney’s. Working with designer and technologist Russell Quinn and writers Matthew Derby and Kevin Moffett, Horowitz has created a book-app chimera with the weight and flow of a good novel and the open-ended world-making potential of a collaborative game. We caught up with him during the frenzy of publication week.

The form of The Silent History is really intertwined with its content. The initial body of text feels different presented inside the interface of the app than it would in a book, and the field reports require location-tracking technology to work as they do. Which parts of the project developed first? The stories or the interaction parameters, or something else entirely?

The interaction between form and content was a fundamental factor in this project from the very beginning. Each decision led to another in ways that seemed perfectly logical, even necessary, at the time, but somehow combined to generate this strange creation.

I guess the first element was that I wanted to create a novel that you could somehow explore. But I knew there was no way I could fill a whole country myself, so that led to the system of field reporters. But I knew they’d need to be inspired and unified by a central narrative, so that led to the testimonials. But I realized I could never write that narrative by myself, so I found collaborators (Matt Derby and Kevin Moffett), but then I needed to make the varied voice a strength, rather than something to hide, so I settled on the oral history format, and I needed a plot that would allow for hundreds of different perspectives, so I ended up with a sort of epidemic, and…well, like that, all the way down to the day of the week in which a given testimonial is released—a Monday entry should feel different than a Friday. The form and content were constantly shaping each other.

The nature of the testimonials varies by day of the week? Seriously?

A lot of electronic fiction experiments try to use multiple devices and platforms, but The Silent History sticks to a single system and explores that system’s capabilities more fully. Did you consider working on the web or using multiple platforms? What led you to settle on the iPhone/iPad?

Yeah, “transmedia storytelling,” right? I didn’t really consider doing that, but I’m not certain why not. Partly because those kinds of projects often seem to be fundamentally concerned with media, information, The Modern Consciousness—and that wasn’t really what I was interested in with this story. Also, from the beginning we were approaching this as a piece of literature—that’s what we do best, and that medium is just as powerful as ever, so we tried to stay focused. Our choice of iOS specifically was mostly for practical reasons: the devices, the users, and our limited resources—the entire app was developed by a single person, Russell Quinn. I wish that wasn’t a limiting factor in the potential audience, but I don’t know what to do about it.

The main “archive” of stories in app takes the form of a documentary, but also of a serial, which we get frequently in television and comic books, but rarely in longform fiction. How did you arrive at this combination of forms, and what does it let The Silent History do that other forms wouldn’t?

I kind of backed into the serialization aspect. Once I decided this book would be read on these devices, I then tried to make all the content necessitate that form. (Semi-rational reverse-necessitation is probably a repeated theme throughout this project, I guess, and maybe also in everything else I do.) Serialization in print would be a pain, for various practical reasons, but in an app it’s relatively simple. So I thought: okay, it’s a serial—and then the task was to find a narrative format that took advantage of that.

I bet there are interesting ways to explore serialization far beyond what we did here—where the evolution of the narrative is somehow shaped by the readers’ response or weather patterns or I don’t know what, or maybe playing with the delivery pace in some fun way, or…

You’re opening up part of The Silent History—the field reports—to outside contributions. What’s your editorial relationship to those contributions? Will you moderate or shape them?

Yeah, I’ll definitely be editing and curating them. I have no idea yet whether that’ll be manageable or overwhelming, but I know it’s necessary—we need to ensure a certain level of quality if we want to retain readers’ trust, especially given the physical commitment of actually walking to the location.

It’s not super easy to add stories, right? You have to go to a location with your device and create within the constraints of the established world. How do you expect that the effort required to do that will shape the kinds of contributions that you get?

The format can be a bit tricky to get the hang of at first, but then I think it’s a fun little puzzle. Just sitting in a quiet room and inventing brilliant whatever has always felt aimless and intimidating to me—I prefer creativity within confines. In theory, the specificity of the form will result in a smaller but more dedicated group of contributors—but it could just mean we end up with a huge pile of useless reports. I do know that I wasn’t trying to build a wiki, and I don’t particularly see this as “user-generated content.” To me, it’s not so modern or unusual, just a fluid community of writers and readers, with an element of guidance and structure at its core.

How do you imagine the different experiences of those who read The Silent History from the beginning, one story at a time, and someone who comes in after all the stories are up and reads it all at once?

That is among the things I wonder. One challenge in designing this whole thing was that there will inevitably be so many different paces to the reading—readers who start on Day One vs. readers who come at the end, like you say, but also readers who read a new entry every morning vs. readers who binge once a week or once a month. Why deliver 1000 words a day rather than 100 or 10,000? We tried to balance the various concerns and possibilities. All those different reading patterns are certainly fine by me, and I think the format can accommodate them. Hopefully individual readers will just find whatever approach works best for them and not worry about it.

What happens to the project once everything is released? How long after it ends will it be possible to contribute to the field reports?

That is a great question—I look forward to knowing the answer. I guess it depends on the reception, the interest level…I mean, in theory it’ll just get better and better, right?

So many of the “transmedia” experiments have felt stilted and awkward and forced. The Silent History…doesn’t. It feels more like a revelation or a marshaling of storytelling layers that have always been in the world. And in that way, it feels like it’s closer to the open data movement or the iPhone spectrometer—these things that peel back the opacity of the world—than it is to the awkward interactive and augmented reality projects I see at, like, SXSW.

That’s nice to hear. Partly it’s probably because none of us, for example, have ever been to SXSW. Or maybe Matt’s band once played there? Probably not, but I’ll leave that possibility alive to make him feel good. Maybe it’s true! Probably it’s true! Anyway, all of us were pretty ignorant about the previous experiments in this sphere, and maybe that allowed us to approach the project from a more fundamental perspective. I had no particular technological insights—I just like stories and I like exploring weird alleys and alcoves and whatnot. Those are basic human interests, at least for me, and the whole project sprung out of those motivations. This app had three authors and one developer; partly that’s because Russell is a wizard, but it also says something about our priorities. The technology is intended to serve the story.

In its own way, this project is about interactivity and augmented reality, just in a lower-fi way: you interact with the story by physically standing inside it; it augments reality by just providing a different explanation of what’s already there.

It occurs to me that all of your readers, including me, are going to be wandering around in physical space triggering stories about a new kind of silence while staring quietly at our tiny handheld networked supercomputers. How does that relationship fit into your sense of the project, if at all?

Once you start thinking about it, the project is full of semi-comprehensible little resonances like that. I mean, it’s a lengthy book about the failures of language. It’s an oral history about people who can’t talk. It’s a digital book that is dependent upon engagement with the physical world. Etc.

But to return to your actual question, imagining actual readers using this thing is slightly terrifying at the moment. Words are easy—you choose which ones you want and they stay where you put them. But the world is messy—these field reports only really exist via a weird combination of text, reader, and physical environment, far beyond anything we can hope to control. But I guess that’s what makes it exciting. 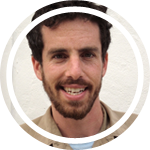 Eli Horowitz was the managing editor and then publisher of McSweeney’s for eight years, working closely with authors including Chris Adrian, Salvador Plascencia, Deb Olin Unferth, Michael Chabon, Adam Levin, Joyce Carol Oates, and William Vollmann. He is the coauthor of The Clock Without a Face, a treasure-hunt mystery, and Everything You Know Is Pong, an illustrated cultural history of ping pong, and his design work has been honored by I.D., Print and the American Institute of Graphic Arts. Before McSweeney’s, he was employed as a carpenter and wrote science trivia questions tenuously linked to popular films. He was born in Virginia and now lives in San Francisco.

“Inside The Silent History” appeared as an Interview in Issue #4. Issue illustration by Meagan Fisher.