In the Heart of the Country, J. M. Coetzee’s 1976 novel about an embittered, bewildered woman spinning half-nonsense tales, is gripping and confusing. The book is full of language that seems borrowed. When Magda (the narrator) isn’t parroting the psychoanalytic tropes of some German philosopher, words are literally falling from the sky. Literary scholars in the 37 years since gave up on making sense of her ramblings, threw up their hands, and called her mad.

Over a hundred years earlier, L. M. Alcott’s Old Fashioned Girl made perfect sense—it was a lovely little story for children. Alcott scholars focused on her other books, tracking down her influences all over Boston. None noted her protagonist’s name: Mary Milton. Despite critical histories of Milton reception in New England and Alcott’s obvious references, it simply didn’t come up; scholars were focused on another track.

With both of these books, we missed the influences—or, as Harold Bloom calls them, the “hidden paths” from text to text. I like Michael Riffaterre’s term for them: intertexts, or “a text or series of texts selected as referents by the text we are reading” that refer us to them “in such an obvious way that we cannot fail to read on two levels at one time.” When intertexts surface, they let us read between the lines, where they add depth and complexity, drawing the text-at-hand into a rich conversation. Intertexts are authors’ way of laying claim to a conversation, tradition, or history. This kind of borrowing can work as shorthand, or, at its most interesting, it can allow authors to unmake sense—using texts that are remnants or reminders of how the world used to make sense.

When we miss the intertexts, our readings are limited. We construct meaning based on the context we’re aware of—which is limited by our knowledge and assumptions. Coetzee scholars assumed the contexts for In the Heart of the Country would be mostly South African, leading them to miss an intertext that helps makes sense of the book’s most bewildering sequence. In the penultimate scene of the novel, Magda hears voices, which speak to her in a Spanish of “pure meaning.” The quotations that fall from the flying machines are so dense that it can be hard to tell where one ends and the next begins. But if you track down their sources, another book emerges as a sort of lens. Octavio Paz’s The Labyrinth of Solitude seems to be the source or mediator of several of the phrases, suggesting that Coetzee is engaged in a wider international conversation about postcolonial identity and consciousness. At the very least, Magda’s ramblings seem more lucid if she’s demonstratively wrestling with the cultural and literary antecedents of colonialism. At best, it illuminates Coetzee’s ambitions, challenging us to read Magda as the nexus of his investigation into the possibilities and limitations of [white] South African postcolonial consciousness.

Scholars missed the referents because they were looking in the wrong places (everywhere but Mexico). Coetzee is famously oblique and widely read. His references aren’t cited, and he’s never named them—scholars could only guess. I don’t think he expected casual readers to catch his intertexts, but even the connections that have been noted by scholars would do little to benefit readers; their explications are all locked in scholarly journals behind academic databases.

Coetzee is a bit of a special case, but we often miss or mistake intertexts for more pedestrian reasons: sometimes we don’t expect them, we can’t track them down, or we just haven’t heard of the text being referenced. Scholars missed a crucial intertext of Louisa May Alcott’s An Old Fashioned Girl because they didn’t expect to meet Milton in a sentimental romance for children. Current readers miss it because they just haven’t read much Milton.

When An Old Fashioned Girl was published in 1870, John Milton was a fixture in New England popular culture. Schoolchildren read his poetry, magazines referenced his life and work, and a fictionalized biography had just come out. He represented an authoritative voice that could be invoked to support progressive theology or defend the elite classes’ position of power. Alcott’s “Mistress Milton” is just a girl—but a girl who argues for women’s influence beyond the home. The allusion to Milton, light as it is, imbues Alcott’s character with some of the consensualism and progressive authority of that Milton. To her 19th-century readers (even the young ones), the Milton name made her arguments seem a little weightier and a little less radical.

Allusions like these used to work reliably (at least within the English-speaking, British- and American-educated world). A shared canon meant readers had read roughly the same things, and likely in similar contexts. This shut out a whole world of writing, but it did provide a pretty safe set of referents to use: authors could assemble those texts expansively, gesturally, trusting that readers would be able to spot intertexts surfacing and understand the tone of the references—a nod to Milton here, an ironic wink at Keats there. The canon, of course, blew up—and with it went the legibility of many of those intertexts. We just don’t all know the same books anymore. Within certain fields and traditions, references still work, but that limited scope constrains their power; there are no reliably common ways to claim a stake in a different tradition or challenge an adjacent narrative.

This should be fixable. Doesn’t the internet give us hyperlinks for linking to anything, regardless of niche? But instead, some of the divides are deepening. Online texts link amongst themselves, but run the risk of drifting further from offline texts. Alcott scholars missed intertexts for An Old Fashioned Girl because they didn’t look beyond Boston; we’re dropping links because we forget to look offline.

We need solutions at two levels: to investigate and document our readings, and to enable legible intertextuality in the reading experience itself.

First, we need to be better at investigating and documenting. Reading isn’t always a one-way track. Sometimes we spend years with a book, reading and re-reading or tracing back its influences. Sometimes we come back to books and find that they make more sense with new contexts. This is the fun of the network: Texts make sense differently when they’re connected. Books that seemed like nonsense become sense. Books that seemed simple reveal complexity. Threads of conversation unspool through centuries and across continents.

But it can be hard to know where to start, especially when you’re stuck in a book that seems slow or nonsensical. We should help each other, sharing the networks we uncover and illuminating the connections we find. We do this faithfully as we read online—we pull together related links, bookmark and tag our reading, and credit our friends for pointing us in the right direction. Let’s do it for books, too, as a way of battling our addiction to recency; let’s dig into the archive, then share our re-readings. When we bother to track down the referents for a book and make sense of it, let’s share that hard-fought sense.

The most important part of this is writing, and not just reviews. Writing meditations, interpretations, questions, and essays. But the choose-your-own-adventure magic of academic writing is all in the bibliography. In the bibliography, or works cited, you can find all the pieces that went into the reading, all the scraps of sense other people made, all the lenses and frameworks and context. Here’s how I propose bringing the bibliography online and making it lovable:

Second, we should be experimenting with intertexts—how they surface, how we follow them, and how they change the text at hand. Books have traditionally used the narrative to surface intertexts: A book comes up in dialogue, characters act out a tableau, a book is spotted on a table, or, in Coetzee’s case, words fall from a flying machine. Sometimes quotations are set off by italics or quotation marks, but often the boundaries are less clear. If we understand the reference, it adds depth. If we’re confused, we flag it to come back to. Either way, we keep reading. The text at hand remains at hand.

Online, we behave differently and have different expectations. We’re used to reading nonfiction, so we see hyperlinks as branches to explore, often leading us away from the text at hand. And we expect all relevant other texts to be hyperlinked. As we read more books on devices that can also display websites, we need to find ways to represent intertexts without losing their nuance or focus. We should be able to capture—and improve on—the complexity of our paper references, while adapting hyperlinks to make intertexts more legible.

What if intertexts could be invisible unless you were looking for them, so you could read without noticing them or mouse carefully over every word looking for clues? What if intertexts could overwrite, fade, or push aside the text at hand? What if the text could fight back? What if the texts that fall in In the Heart of the Country actually fell, landing in Magda’s musings to give them shape and sense?

At one point in her story, Magda laments: “these words of mine come from nowhere and go nowhere, they have no past or future, they whistle across the flats in a desolate eternal present, feeding no one.”

She’s wrong; her words come from somewhere, and have a past, are going somewhere and have a future. But if our texts are going to be more nourishing than hers, we’ll need to keep them grounded—to their places, to their pasts, and to each other. 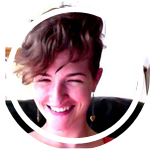 Corey lives in San Francisco and likes the internet a lot. A recovering academic, she works at the University of California Office of the President, where she wrangles web content. You can find her on Twitter at @coreycaitlin.

“Reading Between the Texts” appeared as a Feature Article in Issue #5. Issue illustration by Rob Weychert.