I help run a site, Longform, that collects great non-fiction, past and present. Every day, we post links to four pieces, emphasizing evergreen interest over current events. The articles come from magazines well-known and obscure—it’s a straightforward project that serves audiences simply looking for something to read. Some of the picks are newly published, others decades old, as relying on the entire corpus of articles available online provides a deeper well from which to recommend.

Magazine editors occasionally ask us about trends we see, and what gets clicked. We find that articles on sex and crime overperform, while those on politics or the media seem to lag. Not shocking—people like sex, and any political leaning divides a crowd. But a second peek into the analytics seems to surprise almost everyone: older stories are read at the same rate as new ones.

Our data set is, of course, limited. But as few other sites present new and older material alongside each other consistently, it’s an interesting spark for discussion: Why is the relative interest in pieces from the past so surprising? And, as we move print archives online, how can the back catalog thrive?

The new vs. the archive

Currently, the presentation of reading material online is driven by two approaches: the new and the archival. This dichotomy is visible on nearly every landing page—what should sit on top? The newest stuff? If “the new” represents the landing page, then “the archive” represents everything else.

When we present articles based on their newness, we suggest that their primary appeal is as news. News occurs in real time and we champion shaving even a few seconds off the lag between events and their dissemination. As writers, we research in-depth features, sure—but we blog to fill time between features, and we tweet to fill time between blog posts. As readers, we pull-refresh and pull-refresh again, awaiting the news like a child up too early on Christmas morning. When we separate from our connections for a day, we wonder what “news” we have missed. And we miss not just the news itself, but our collective experience of news. We ingest current events—presidential debates, the Super Bowl, even massacres—together in real time, to the degree that the next morning’s headlines feel increasingly like an afterthought.

Because we think of the news item as a basic unit of communication, when we visit a publisher’s site, we expect to find a river: a strict vertical list with the newest stuff at the top and the oldest stuff at the bottom. The river makes a lot of a sense: regular visitors need to know if anything new has been published since their last visit. Its design also suggests that new articles, like new cars, lose value the minute they are driven off the lot. The river, we assure ourselves, is democratic. Each article gets its fair shot, then floats away, forgotten and obsolescent. The river is progress. The articles being published today are better than the ones published last year. And far more relevant to the concerns of today!

It has not always been so.

An interface for the past

The early web wasn’t built for news. Pages had to be updated by hand without the steadying ease of a content management system. When your favorite site published a new page, there was no easy way to get notified. Nascent web surfers often first experienced digital news not through a webpage but through a proprietary portal. The AOL of my memory, for example, offered chat rooms, a news page, and a web browser (order of importance my own, age 13). Later on, the rise of search meant that pages could be discovered, summoned from the aether with a mere description. The web began to shape itself not as a newsstand but as an archive, a library without a footprint.

By the time print publishers began to care about the web, things had changed. A new format had lured readers to screens by the millions: blogs. Blogs took their format—a reverse chronological river—from the CMS’ that made them possible. As longstanding print publishers arrived (a bit late as usual) to the party, they chose to follow suit. For these publishers, the initial challenge was simply getting new pieces online and convincing an audience to view them, and perhaps even pay to do so. New, web-based publications had no back archive to contend with, and were free to live in the eternal present. Archives were not a concern. At least, for a while.

But Salon is 18 this year. Gawker turned 10. Projects enormous (Google Books) and humble (home scanners loading pages from defunct magazines onto blogs), join the millions (or billions? I have no idea) of pages that publishers large and small shovel into their archives each year. Publishers come and go, but the archive just keeps getting bigger.

The obvious entry point into these archives is search. Looking for a restaurant menu? A clip you remember seeing on Sesame Street as a child? Search has you covered. Looking for something to read on a flight? Not so much. If you don’t already know what you’re looking for, you simply aren’t going to find it.

But what makes a serendipity machine go? Human input. Or, what is commonly referred to as taste.

Basing a system around human taste doesn’t preclude algorithmic help, but the clear imprint of a curator elevates it. The reason that Longform visitors click new and old stories in equal numbers is that real live breathing humans make the selections. It doesn’t necessarily matter who is doing the recommending, or their intentions in offering selections. I have no idea who selects Criterion Collection releases, but they slice the whale of cinema history into nice filets that give me access to something I prefer over a list of new releases. Once you accept that you’re taking a bonafide tip from a fellow member of the species, much of the bias and skepticism that goes into decision-making erodes.

Would-be archivists must use the tools at their disposal to build trust in visitors: limitation, enthusiasm, and honesty. A good recommendation leads to trust. While publishers have something of an obligation to push all their new stories, they might only spotlight a few particularly great items from their archives—which in turn makes those selections more trusted.

Archives work best when they escape the content silos that drive the creation of new material. When art and information from disparate sources are merged into a single archive, new pathways into the content emerge. Napster gained a (deserved) reputation as an epicenter for P2P piracy, but quietly also functioned as an unparalleled archive of rare recordings. YouTube offers a completist’s compendium of video and audio that was unimaginable a decade ago. Services like Spotify and Netflix offer seamless entry into worlds of music and cinema in which the “new” is a side option. These services are built around vast archives, and the consumption patterns they have inspired are far less oriented to new releases than to recommendations distilled from the taste of others.

As much as I’d like to see a YouTube for text (someone please make this!), there’s plenty that individual sites large and small can do to invigorate their archives. Add space on the homepage to bring stories back to the homepage. Help connect the old and new with topical collections that include selections from both. All articles are not created equal—track the best ones and put them into a Greatest Hits section. Seeing what kinds of writing drives enduring interest can also inform the editorial process in seeking out timeless pitches.

Being a fan of your own archive is the first step toward engaging others and doing right by the writers, editors, and designers who have poured their hearts into work that deserves to live longer than the week it’s posted. Archives aren’t a technical problem that can be solved with a plugin or recommendation engine. Their contents were built by people, and they require real human effort to shine. When you invest in your archive, however, you do more than simply pad your pageview count. You announce to the world that your work merits ongoing interest, and you confirm to your readers that the relationship you’re building with them is long term.

“Leave a campsite,” my father would always say, in relation to everything from actual campsites to our recreation room, “in better shape than you found it.” The web is our campground, and decisions made today will affect what future generations find there. A dystopian landscape of link-bait slideshows with barbaric headlines is one possible outcome, but it’s not the only one. Focusing on the archive is, at its core, a strategy for creating outstanding new work. Articles considered in the context of their influence over years and decades, instead of minutes and days, must inherently aim higher. While such ambition asks more of both the creator and the consumer, it’s worth it, because it leaves something of value behind. 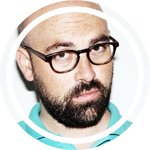 Aaron Lammer is a co-founder of Longform. He lives in Brooklyn, where he spends his days working on the Longform app and co-hosting the Longform podcast, a weekly conversation with a non-fiction writer.

“The Archive is a Campsite” appeared as a Feature Article in Issue #5. Issue illustration by Rob Weychert.