Three summers ago I was unemployed and sleeping on a friend’s couch. I had nothing much to look forward to, so I spent my time in the past. I pulled interesting-looking books off the library’s history shelves, browsed old aerial photos, and paged through random searches on the website of the Library of Congress. It was comforting to read stories whose endings I knew.

One of the only books I read for the first time that summer was Yasunari Kawabata’s The Master of Go, a novel about a board game match. It’s based on a real game, played in 1938, that Kawabata had covered for a newspaper. It’s oblique and fragmentary. Sometimes I couldn’t tell whether it was supposed to be boring. But by turns so small that I didn’t notice them, it sewed strips and patches into something that moved smoothly around me as I read. I’ve never felt more inside a book—at a time when I was made of fragments myself—and yet I can’t remember a single line to quote. The memory is there but its pieces are not.

Everything felt too much the same to me that summer. Nothing registered properly. I tried to make a virtue of numbness by learning about things that would usually be too painful to look at. I read about famine. By trial and error I learned to winkle food security maps from the government of Ethiopia’s website. I read the development economist Amartya Sen’s claim that a famine has never happened in a functioning democracy. I was trying to remind myself that I could be infinitely worse off—and hoping, in retrospect, to learn how people get unstuck from cyclical problems. When I found something that helped me into the world again, though, I didn’t know it.

I was pawing aimlessly through satellite images one night and noticed a lot of strangely squared-off lakes. A Google image search for Patishar, Bangladesh, one of the villages among the lakes, produced no photos of lakes, but several of a mansion, a residence of Rabindranath Tagore. The name was familiar—a mystic popular with European spiritualists of the 1920s, or something like that. I closed that tab.

The lakes were mostly for irrigation, squared off by long pressure from right-angled property boundaries. Development banks were extending microcredit to start small fish and shellfish farms in them. I read that a local forerunner of these banks, the Kaligram Krishi Bank, had run on many of the same principles: taking no collateral, charging only token interest, and lending to groups. Most of the bank’s endowment had come from the purse of the 1913 Nobel Prize in Literature, which went to its founder, the hereditary landlord of Patishar, Rabindranath Tagore.

The archives are best just before sleep, as memory and imagination take sway. Every archive has an intended logic, a day logic, with well-defined topics, alphabetical orderings, hierarchical taxonomies, or cross-referenced indexes. At night we see less of what is intended and more of what is there. We notice that the butterfly specimen cases ended up next to the drawers of pressed flowers. The minutes of the astronomy club are on the highest shelves, and some papers of Francis Bacon the essayist got in among papers of Francis Bacon the painter. Nothing can be as crowded with meaning as an archive and not earn its own dream logic of short circuits and coincidences. I looked up this person who had appeared twice in one night. Rabindranath Tagore (1861–1941) was a Bengali writer. And I closed that tab.

One difficulty of microfinance is measuring benefit. Should a development bank try to help people be richer? Healthier? Happier? This thread led back to Amartya Sen, who with the philosopher Martha Nussbaum had proposed the capability approach, a framework for discussing development with less attention to raw income than to choice and fulfillment. I was broke and unhappy, and this cheered me up. In Sen’s essays, he mentioned that he had gone to an experimental school and been named by its founder—Rabindranath Tagore.

I’d made a friend. Since that night, Tagore appears to me in the archives like a playful ghost. He strolls across the stage in the crowd scenes of biographies. He is heard momentarily in letters and newspaper clippings. Like a graffiti artist’s tag in corners all over the city, his name is tucked into prefaces and footnotes in every room of the library. I find him in the indexes of books where I wouldn’t expect to—but not where I would. He is very hard to bring into focus.

A lifetime ago, Tagore was the world’s most famous living artist. He was friends with Yeats and conversed with Einstein. Woodrow Wilson and Bertrand Russell wrote to him. Maria Montessori visited his model school, attended by the prime minister Indira Gandhi and the auteur Satyajit Ray. He toured every inhabited continent. He met Caruso when Hellen Keller read their lips, and he was the first foreigner to meet Pǔyí, the last emperor of China. The war poet Wilfred Owen died with a stanza of Tagore’s penciled on the back of old marching orders. When Owen’s mother read it, she wrote Tagore to ask which poem it was from, and her letter found its way to Tagore with no address on the envelope, only his name.

And now he is almost forgotten from the English-speaking world. Or from my part of it: I find him in the archives, but I have never heard his name spoken in person.

One reason he’s gone is that he was a fad. He was taken up by a reading public full of an interwar spirit of optimism and internationalism that looked appallingly naïve after the Holocaust and during the Cold War. And to contemporary readers, the esteem in which Europeans and Americans held him can stink of soft racism: he was exoticized, tokenized, and made an object of the most unreflective Orientalism.

His writing is as much to blame. Taken out of context or read impatiently, it wilts. Most translations are stilted and dated. It can be sentimental. It is easy to dislike. It is also a vast and loving picture of the world, full of mundane details, long relationships, mistakes, wit, inequities, instants as sharp as shards of glass, post offices, birds, death, complicated institutions, second chances, childhood, appalling impulses, hope, ambiguous advice, food, and people. It records the world, it interprets the world, and it invents the world. One of its curiosities is that all its people, through their connections, have paths to joy and truth.

Who are you, reader, reading my poems an hundred years hence?
I cannot send you one single flower from this wealth of the spring, one single streak of gold from yonder clouds.
Open your doors and look abroad.

From your blossoming garden gather fragrant memories of the vanished flowers of an hundred years before.
In the joy of your heart may you feel the living joy that sang one spring morning, sending its glad voice across an hundred years.

Tagore’s influence scattered into the world, beloved but uncollected, like the impromptu stanzas that he wrote on admirers’ paper scraps while touring. He is in politics and activism, hidden behind the image of his friend Mohandas Gandhi, whom he held back from many ill-advised projects. He is in education via Montessori, and in economics via Sen and the Grameen Bank. He is especially in literature: via Anna Akhmatova, Bertolt Brecht, T. S. Eliot, Pablo Neruda, Victoria Ocampo—a reader could live many happy years on books by his admirers. Kawabata, who wrote The Master of Go, was a particular fan.

Whenever I looked for something specific of Tagore’s—a painting or a ledger—I was cobwebbed by bureaucracy, closed collections, arbitrary fees, waiting periods, unclear rights, unintelligible translations, inconsistent transliteration, political squabbles, confused naming schemes, mislabeling, broken CGI scripts, and bad scans. I could not seek out, only browse.  There was one biography of him in Portland’s central library, and I read it while walking around downtown. I was in the hotel district when I read how, in Portland on tour in 1916, he’d lost his dentures down a hotel bathroom drain. I laughed.

Archives cut up the understandings we make of things as we live them. As fragments, distant pieces of the world can find each other. When we visit the archives, we are visited by what arises among the fragments: by memories with their own power, by coincidences, by hidden patterns and new understandings. As we step out of the archives into everyday life, and back and forth, like we cycle between dreaming and waking, we stitch our own seams. 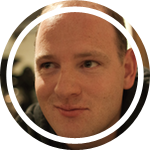 Charlie Loyd is a programmer and occasional blogger. This winter he moved from Portland, Oregon, to Washington, DC, where he works at MapBox on satellite imagery. He is found on Twitter as @vruba.

“The Garden” appeared as a Feature Article in Issue #5. Issue illustration by Rob Weychert.